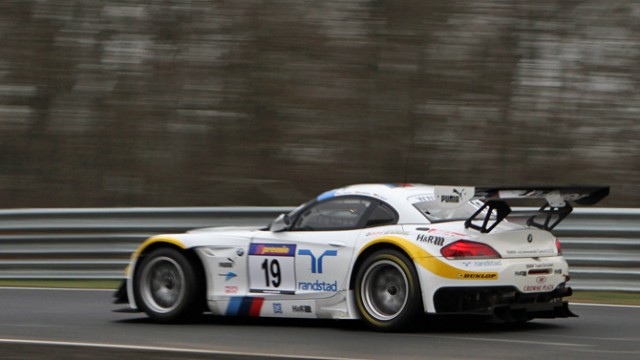 Claudia Hürtgen, Dominik Schwager and Dirk Adorf crossed the line in second place at the Nürburgring-Nordschleife, while team-mates Uwe Alzen and Nico Bastian came home behind them in third place. Victory went to Porsche drivers Jochen Krumbach and Marc Lieb.

The number 19 car, which finished third on Saturday, had started the season with a fine win two weeks ago – and for a long time victory number two seemed well within the grasps of the BMW Z4 GT3. Closely watched by BMW Motorsport Director Jens Marquardt who was on site, Alzen and Bastian had led for long periods of the race and were the only car among the front-runners to have come in for their third and final pit stop when the DMV 4-Hour Race was forced to abort the race prematurely due to heavy hail. As a result, the two BMW Team Schubert drivers dropped back from first to third place. Despite this, the general feeling in BMW Team Schubert was one of great satisfaction after another strong performance in the legendary “Green Hell”, which will host the 40th running of the Nürburgring 24 Hours on 19th and 20th May 2012.

“It’s just great that we made it on the podium,” said Alzen. “Obviously we would have loved to win here. We had held the lead for most of the race and had just completed our final pit stop, when the red flags came out. That’s a pity, but such things can happen in motor racing. The fact we still managed to finish third shows the competitiveness of our overall package. A big compliment goes to BMW Team Schubert and my team-mate Nico Bastian: Everyone in the team did a great job today. Now I’m really looking forward to the next VLN race – and, of course, I cannot wait for the 24-hour race to get underway.”