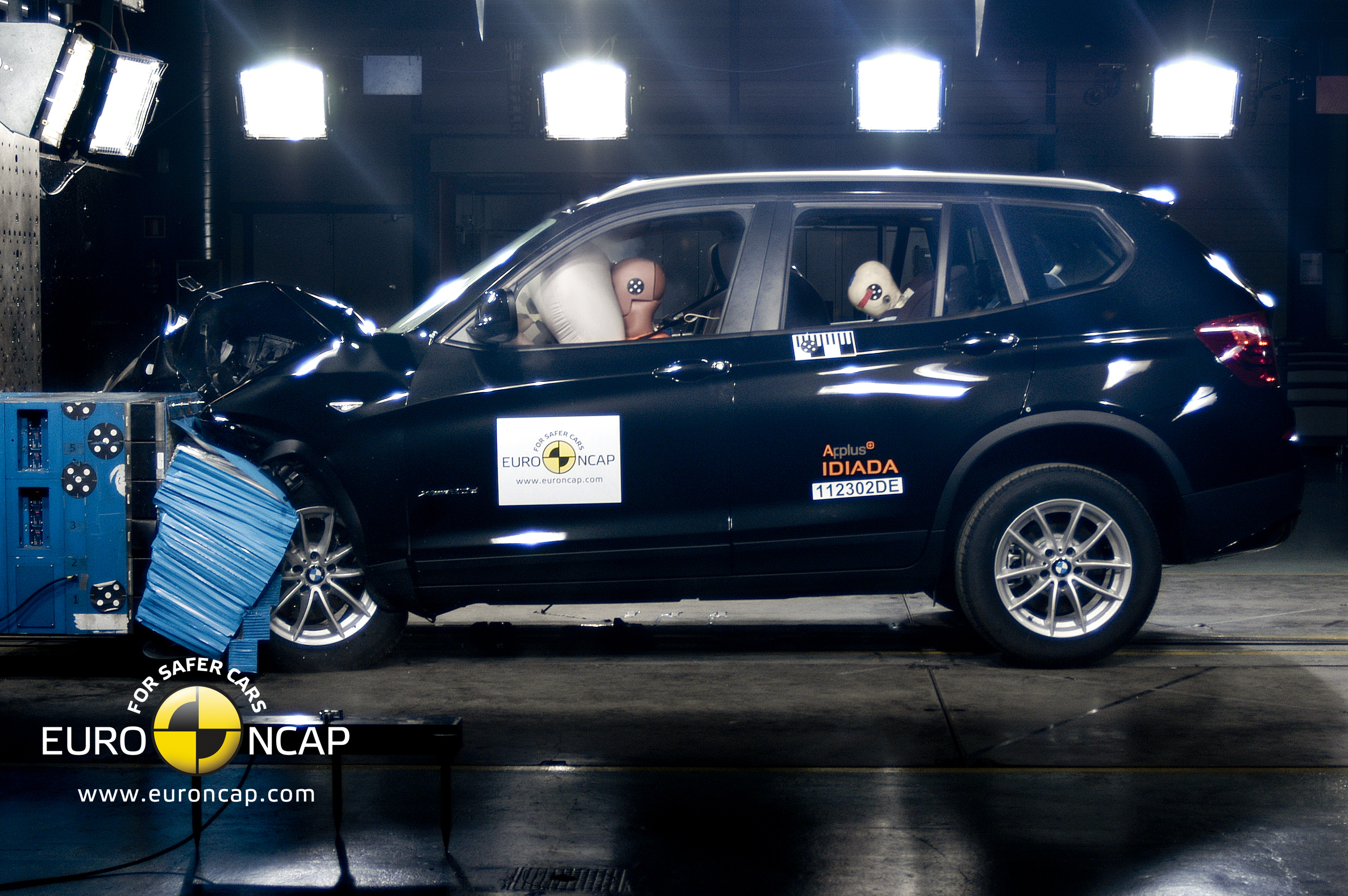 It comes no surprise to us here at BimmerFile that the F25 X3 recently scored 5 Stars in the difficult Euro NCAP crash testing. BMW has made a commitment to safety and building vehicles that in the event of an accident have the ability to protect the occupants at an industry best.

There are some differences between the Euro NCAP test and the tests used in the US; in Europe pedestrian safety as well as the safety of child occupants is considered as significance in the testing.

Full release and detailed PDF after the break.

Munich – August 25, 2011… Thanks to its segment-leading dynamic handling and versatility, the new BMW X3 has emerged as a highly successful model in the international car markets within a matter of months. The fact that it also assumes an exemplary role on the safety front has now been confirmed by Europe’s leading crash test programme. In the latest Euro NCAP crash test, the BMW X3 achieved the highest rating of 5 stars. The second-generation Sports Activity Vehicle earned its top marks in this challenging test for new vehicles thanks to its comprehensive range of standard safety equipment and effective occupant protection in various types of collision.

Achieving the best rating in the Euro NCAP crash test is proof of the very high level of the safety concept developed for the BMW X models. The new BMW X3 boasts an extremely stable body structure, and the forces exerted on the vehicle in a collision are deflected along precisely defined load paths and absorbed by generous deformation zones. Consequently, the passenger cell fulfils its function as a survival space even in serious collisions. Standard safety equipment inside the new BMW X3 includes front, side and curtain head airbags that protect both the driver and the passengers from injury. Also standard are belt latch tensioners and belt force limiters for the front seats and ISOFIX systems in the rear for attaching child seats, as well as the option of deactivating the front passenger airbag. The restraint systems are controlled by the central safety electronics, which take into account the type and severity of an accident to trigger the most effective protective features in each case.

In their evaluation of the crash test results, the assessors concluded that the new BMW X3 provides a high degree of occupant safety in all seats. Its stable passenger cell provides comprehensive injury protection in a front-end collision for both the driver and the passengers, regardless of a person’s size and the position of their seat. Here the Sports Activity Vehicle was awarded outstanding ratings for the protection of children aged around three years or 18 months in the relevant-sized child seats. For its side impact protection, the BMW X3 likewise achieved the maximum available points.

The new BMW X3 earned an outstanding rating for its active safety features as well. The Sports Activity Vehicle comes as standard with the Dynamic Stability Control system (DSC), which is linked to BMW xDrive intelligent all-wheel drive. Thanks to its wide-ranging functions, including Braking Assistant, Cornering Brake Control and the traction mode DTC (Dynamic Traction Control), Dynamic Stability Control ensures easily controllable and secure handling even in challenging driving situations. Further standard features on the BMW X3 include a Tyre Defect Indicator that warns the driver in good time of a loss of pressure in any individual wheel.

The test procedure of the NCAP (New Car Assessment Programme) ranks as one of the most rigorous tests worldwide to which new vehicles are subjected. The Euro NCAP test is a benchmark for crash safety recognised throughout Europe by governments, automobile clubs and consumer associations. The test profile includes, among other aspects, a frontal collision, a side-on crash and a side impact against a steel post. Since 2009, electronic safety features have also been taken into account, along with additional injury risks in a wide range of collisions.