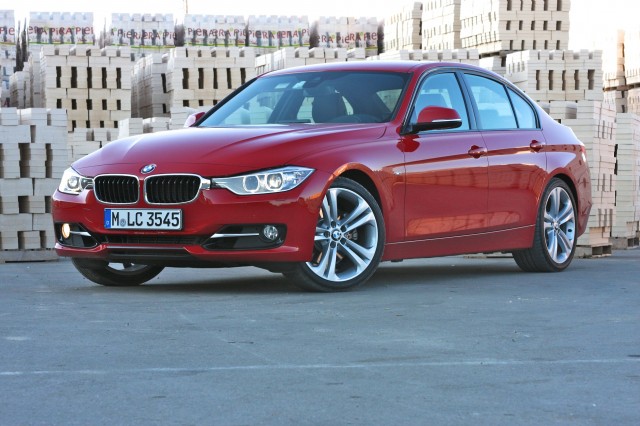 For the first time in recent memory (if ever) the EPA shattered BMW’s Monroney dreams. Taking the 8 speed automatic 328i’s lofty 36mpg highwayand relegating it to a mundane 33 mpg. What that means is that the 4 cylinder N20 that is newer and is marketed as the more efficient engine offering is rated the same as the larger N55 inline six cylinder in the 335i. How can that be possible?

The first thing that came to mind is that the test was botched, BMW may have used a different test protocol or the EPA tested with a car that had some issues. One mile per gallon adjustments are typical but a minus three is unheard of, so something is up. As we dug deeper we discovered something that wasn’t advertised by BMW and something that was a significant departure from the normal BMW mantra. We were utterly surprised. We had discovered something that even some BMW employees weren’t aware of or even trained on. The 328i and its N20 are stated to run not on the normal BMW recommended minimum 91 octane BUT 89 octane. (We may be living under a rock but we are not aware of any other BMW that states 89) 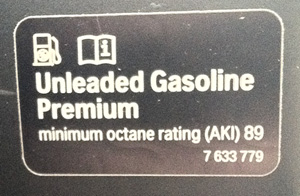 FuelVehicle equipmentAll standard, country-specific and optional equipment that is offered in the model series is described in this chapter. Therefore, equipment is also described that is not available in a vehicle, e. g., because of the selected optional equip‐ ment or country variant. This also applies for safety-related functions and systems.Fuel qualityFuels that are marked on the gas pump as con‐ taining metal must not be used.Refuel only with unleaded gasoline with‐ out metallic additives.Do not refuel with any leaded gasoline or gaso‐ line with metallic additives, e. g. manganese or iron, or permanent damage to the catalytic con‐ verter and other components.◀Do not refuel with ethanolDo not refuel with E85, i.e., fuel with an ethanol content of 85 %, or with Flex Fuel, as this would damage the engine and fuel supply sys‐ tem.◀Required fuelGasoline with lower AKIThe minimum AKI Rating is 89.If you use gasoline with this minimum AKI Rat‐ ing, the engine may produce knocking sounds when starting at high outside temperatures.This has no effect on the engine life.Minimum fuel gradeDo not use any gasoline below the mini‐ mum specified fuel grade; otherwise, engine damage may occur.◀Use high-quality brandsField experience has indicated significant differ‐ ences in fuel quality: volatility, composition, ad‐ ditives, etc., among gasolines offered for sale in the United States and Canada.Fuels containing up to and including 10 % etha‐ nol or other oxygenates with up to 2.8 % oxygen by weight, that is, 15 % MTBE or 3 % methanol plus an equivalent amount of co-solvent, will not void the applicable warranties with respect to defects in materials or workmanship.Minimum fuel gradeThe use of poor-quality fuels may result in driveability, starting and stalling problems es‐ pecially under certain environmental conditions such as high ambient temperature and high al‐ titude.Should you encounter driveability problems which you suspect could be related to the fuel you are using, we recommend that you respond by switching to a recognized high-quality brand such as gasoline that is advertised as Top Tier Detergent Gasoline.Failure to comply with these recommendations may result in unscheduled maintenance.◀pg 262 328 manual Online Edition for Part no. 01 40 2 608 633 – 11 09 490

This is something that could greatly influence economy numbers. We may be going out on a limb here and saying that BMW did its internal testing with 91 and the government used 89 in their test, but this is possible and likely what happened. BMWNA does its testing prior to the owner’s manual and stickers for the gas lid are published so if BMWAG had made this decision and the engineers (at BMWNA) were not properly informed of the decision to use 89 it could easily happen especially when everything else is tested with 91.

Will we ever find out what really happened with this? More than likely not, as 2012 is a short run for the new F30 3 Series and adjustments will be made for the model year change over to 2013 in June. This is only a theory of ours but it is one of the only scenarios that makes any sense.