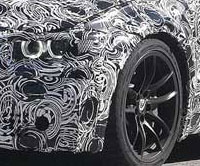 Auto Express has the very first photos next generation M3 has it takes to public roads for the first time. We suspect that what we’re seeing here is a ‘franken-prototype’ in that it’s using the four door F30 3 Series as a test bed since the F32 coupe isn’t ready for even prototype purposes. As we’ve reported previously, M will not be offering an M3 sedan this go around due to poor sales of the current E90 M3. However we do expect a four door coupe to be offered at some point within the next generation M3′s life-cycle.

What we see here is likely M testing the next M3′s tri-turbo drivetrain along with suspension, wheels and brakes. A couple of things worth noting. the breaks look to be similar to the new M5′s set-up and the wheels look very airy (and hopefully) lighter than previous M3 OEM wheels. They also look like 18s from this angle. We expect 19s to be optional as they are now.

You can see all the photos at Auto Express.